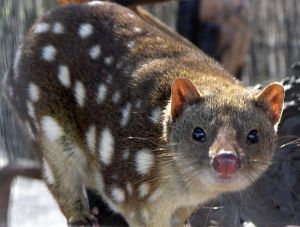 These beautiful and fascinating native carnivores are on the edge of extinction on mainland Australia. Sadly, no evidence of the species was found in the Strathbogie Forest.

2010-11. Growling Grass Frog surveys were undertaken at a variety of wetland sites across the Ranges. Survey on-going at the time of writing. More information: Rowhan Marshall, DSE, Benalla 5761 1611.

Electromagnetic Investigation of the Hydrogeology of Honeysuckle Creek

If you know of other biodiversity-related work done by government agencies, please leave a comment (bottom of page).

One thought on “Government Agencies”