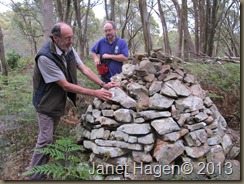 A geodetic survey of the colony was proposed in the late 1850’s by the Surveyor- General  Charles Ligar, with the aim of providing a sound framework for the local surveys. Unlike the trigonometric surveys then underway, a geodetic survey would conform to parallels and true meridians. The proposal was to divide the whole colony into divisions, each being geographical “squares’” of one degree each by longitude meridian and latitude parallel. Each division would then be further surveyed and subdivided by local surveyors.

The geodetic survey began, and quickly faced practical difficulties with surveying geodetic lines of latitude and longitude. The lines could intersect anywhere, in swamps or gorges, and establishing line of sight between observing stations was a problem.

The first meridian (the 145th) was run from west Melbourne northwards to the Murray river, this Meridian being chosen because of its closeness to the Williamstown Observatory.  Thomas Pinniger’s survey of the Seymour –Alexandra area c. 1866 is one of only two places in Victoria where evidence of the geodetic squares survey is known to survive. Pinniger was employed on the geodetic survey in 1859 as an assistant surveyor, later becoming a Geodetic Surveyor. His work focused  on the north-east of Victoria, where lines had been run nearly to the Ovens River. He established geodetic blocks from there to Seymour, Euroa and Mansfield. The work took many years. In 1863 Pinniger was working in the Longwood area and in the space of a year he had marked out fifteen blocks. In 1866 he was still in the same region, and by early 1867 had completed an additional eighteen blocks in the Seymour district”

The Photo above shows Neville and Bert inspecting the Kates Hill Cairn in the Switzerland Range  Nature Reserve at Highlands  after the SRCMN Geology Day. This cairn is built of shale and is in good condition. YEA map  7923-1-2 Easting 360500 Northing 5889900.

It is not listed in the assessment report, which doesn’t seem to be a comprehensive list.

Local cairns listed in the report that we would like to visit are:

Wheeler Hill at Creightons Creek. easting 370630 northing 5919730 – Wheeler Hill geodetic cairn is located close to the highest point of this lightly timbered hill, with the more recent trig nearby. The cairn is built of local stone unmortared and with a central pole. Its condition was recorded in 1963 as excellent and recent photos confirm this . The cairn is 1.8m high and conical in shape.

Another interesting fact about Thomas Wilkinson Pinniger is that he married Helen Stewart of Habbies Howe in 1857. They had a son called George Stewart Pinniger who became surveyor general of Victoria.